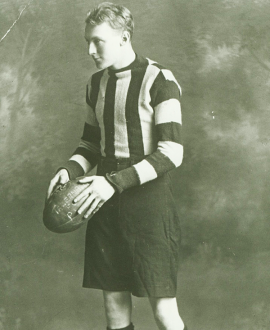 Harry Curtis didn’t possess the classic footballer’s physique, but he sure knew how to play the game. A career that ended up spanning 10 years, two premierships, 120-odd games and nearly 150 goals is testament to that.

And perhaps best of all – from a Magpie perspective – is that he was a Carlton cast-off!

Curtis was one of those freakishly talented junior sportsmen who seemed to be good at everything he touched. He was extra tall and super thin even then – your classic ‘stringbean’ build – but that didn’t seem to limit his sporting prowess. He captained the cricket, football and athletic teams at Carlton College, was middleweight boxing champion of the school, handy at tennis and swimming and once finished third in the Victorian high jump championships.

He was a particularly good cricketer, playing for Carlton’s first XI as an all-rounder while still in his teens and once claiming the wickets of Test batsmen Vernon Ransford and Warwick Armstrong in the same spell. And he also excelled at footy, mostly as a key forward.

He trialled at Essendon but Carlton came calling soon after and Curtis – a boyhood Blues fan – found himself in the VFL in 1913. But Carlton dumped him after just two games, unimpressed with what they’d seen, and he returned to play for the Collegians. In 1914 he played a blinder for that team against Collingwood District (our unofficial ‘seconds’ team), and within weeks he’d been offered a game with the Magpie seniors.

This time he grabbed his chance with both hands, marking “everything in sight” at centre half-forward against Fiitzroy’s highly regarded Wally Johnson. Two weeks later he kicked four goals against St Kilda and his career was on its way. One newspaper immediately labelled him a “budding champion”.

Harry never quite reached ‘champion’ status. But he was a very, very good footballer – talented, dangerous and capable of the odd ‘day out’ when he would completely dominate a game. He was a brilliant high mark, using his height and exceptional judgement to advantage. One critic described his marking as “poetic”.

His kicking was another matter entirely. It could be woeful at times, excellent at others. But it was never consistent. Still, his far-from-trusty left boot was able to steer through majors at a rate better than a goal a game, so he must have been doing something right.

His ground play was another area of weakness, so much so that he was frequently rested from games on wet days or boggy grounds. But he was quick and athletic and he knew how to read the play superbly and use handball intelligently, frequently bringing others into the game. Indeed, he quickly became renowned for his football brain – his knowledge of the game and cool, shrewd play making him a dangerous opponent.

One of the keys to his value at Collingwood was the way he worked in tandem with the game’s best forward, Dick Lee. The two combined well in the forward line together, but Curtis also had a neat habit of stepping up his game when Lee was missing.

In 1917, for example, Lee missed the first two finals through injury: Curtis kicked four goals in the first and five in the second and was virtually unstoppable in both. He kicked another three to go with the returning Lee’s four in the Grand Final. His 12 goals were a record finals series performance to that point.

Curtis continued to perform at a high level for the next half dozen years. His wiry frame, often ridiculed by cartoonists of the time, actually stood up well to the rigours of VFL football: he must have been stronger than he looked. And so highly regarded did he become that, when Percy Rowe resigned the captaincy just three games into the 1923 season, the players elected Harry as his replacement.

That turned out to be Harry Curtis’s last season as a player. The pressures of his business life began to take their toll and he decided to call time on his playing career, despite appearing to still have some good footy left in the tank. But the very next year he took over the club Presidency from Jim Sharp, beginning what would be the second chapter of his long and distinguished career of Collingwood service.

Curtis’s achievements as President were significant (he remains the longest serving in the club’s history), but they shouldn’t overshadow what he did as a player. He has a record that stands comparison with many outstanding key forwards, and played a vital role in two Collingwood premierships. Even if he’d never served a day as club President, that would still be a record of which he should have been justifiably proud.