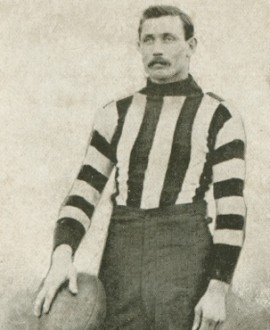 One of the most understated of all Collingwood’s early skippers, George Angus nevertheless managed to carve out a reputation for himself not only as an indefatigable follower who was a part of three premierships, but also as an outstanding leader.

Angus was an important contributor throughout his 10 years at Collingwood, but never more so than during his successful stint as captain and coach when his football brain and ability to determine tactics were most needed. As a player, too, his contribution was immense. He was a tireless and determined follower who was highly valued by his teammates, feared by his opponents and respected throughout football.

There is a common misconception that the Collingwood team in its early years was composed almost exclusively of local lads who had been born and bred black-and-white. But many of the club’s best players in those days were from the country, and George Angus was another, later being described by the club as the most successful country player of its first 20 years.

George Whitfield Angus was born near Kerang in 1875, and showed an aptitude for both football and cricket from an early age. In 1892, at just 17, George led the Macorna Wanderers team to a premiership in the Pyramid District Football Association’s inaugural season. He was already a seriously good player, and would certainly have started his League career earlier had it not been for the intervention of the Boer War.

Angus was part of the 4th Victorian (Imperial Bushmen’s) Contingent which served in South Africa in 1900 and 1901. Angus returned to Australia in the middle of 1901 and recommenced his football and cricket pursuits. In the end it was not until 1902, aged 27, he came to Melbourne to try VFL football.

Angus was finally given his first taste of League football in round seven, and he quickly settled into the Collingwood side. After only his third game the critics were already proclaiming him a star “in everything save marksmanship”. He also gave early notice of the courage that was to become an Angus trademark. After sustaining a nasty gash to his head in a collision with Dick Condon, Angus was advised by doctors not to play the next week. He fronted anyway and played a brilliant game.

Initially, Angus played mainly as a forward. As he gained experience he moved into the following division, where he took on the onerous and unglamorous task of acting as shepherder to the team’s tap ruckmen, firstly Arthur Leach then Les Hughes. This was a role (legitimate in those days) that demanded strength, stamina and endurance and a willingness to absorb frightening amounts of physical punishment. Although only 174cm (5ft 8.5in) and 73kg (list 71b), Angus more than proved himself up to the task, his dour and doughty Scottish nature perhaps being ideally suited. In so doing he won the unstinting admiration of his teammates.

It is perhaps not surprising that Angus and his successors as shepherder, Dan Minogue and Con McCarthy, were among the most respected members of their respective teams; colleagues recognised the hard work the job entailed, and each was duly rewarded with the captaincy.

In Angus’ case that honour came in 1910, after eight years of yeoman’s service — the last of which had been spent as coach and vice-captain. By that stage Angus was already highly regarded for the consistency, if not the brilliance, of his performances. But it was his efforts throughout 1910 and 1911 when he acted as both coach and captain which were to secure his footballing reputation and put the seal on his Collingwood career.

George Angus was never quick, even by the low-paced standards of football in the first decade of this century. But he could read the game well, something which stood him in good stead as captain. He was once described as being like “a champion draughts player — always seeing a few moves ahead”. He was also renowned for his coolness under pressure, his use of the ball and his long, driving kicks. His real assets were his strength, his durability and his willingness to do the “hard” things for the team. “Angus is as persistent as a terrier,” said The Football Follower in 1909. “I know of nobody who spoils other ruckmen by backing into them like the Collingwood coach. It is annoying but perfectly fair.”

The next year it was the newspaper Sport singing his praises. “What a consistent hard grafter George Angus is for Collingwood,” it said. “He hardly ever makes a mistake and, while doing splendid things in the ruck, manages to find time to direct his team with excellent judgement. There is no more honest footballer in the game at present and he is generally to be found amongst his team’s most consistent players.”

Dan Minogue once described Angus as “a typical Collingwood footballer”. “Sturdy and thickset, and not tall, he was a determined follower and leader who liked his football without frills,” Minogue told The Sporting Globe. “One of the dour, taciturn type, he seldom smiled. In fact, I don’t ever remember seeing him smile.” (something his family would later dispute, describing him as a warm man with a ready sense of humour, high standards of integrity and a deep love of his family.)

The 1910 Premiership was undoubtedly George Angus’ finest hour. He was not only captain of the team but coach as well, and overcame a broken rib mid-season to return and play a central role in the victory.

This was one of the most violent grand finals of all time. Les Hughes was decked before the ball was even bounced, and the last quarter was marred by a brawl described variously as “disgusting”, “degrading” and “the most disgraceful scene ever witnessed on a football field”. In the midst of all the mayhem Angus was one of the players to stand tall. The club’s annual report that year said Angus “had never appeared to better advantage than in the final game”. Sport said Angus “absolutely excelled himself’. “Never at a loss what to do with the ball and always cool, Angus played well to his forwards, his driving drop kicks sending the ball well up every time,” it said. So outstanding was his performance that day that the club presented him with a silver coffee service “in appreciation of his gallant efforts”.

But even George Angus’ gallantry was not enough in 1911. At 36 he had intended to make it his last season, and hoped to cap off his career with another flag. But in the second last home and away game of the year he sprained his ankle so badly that it prematurely ended both his season and his career. By this stage everyone in football knew that it took a lot to stop George Angus; in 1909 he had played in a final only days after seriously damaging one of his fingers when he caught it in a machine at work. So this time when Angus was carried from the field, Collingwood fans knew it had to be serious. But The Argus reported that, true to form, Angus was still giving final instructions to his players as he was being carried from the field.

That proved to be Angus’ last game with Collingwood. The next year, with his damaged ankle still troubling him, he coached VFA side Williamstown. He then retired from the game, and devoted much of his time to gardening at his Northcote home (which, with memories of his Boer War involvement, he had named “Rhodesia”).

Tragically, late in 1917, Angus, at only 42, was diagnosed with a tumour of the brain. He died six weeks later. The football world was deeply saddened, for men as well respected as Angus were a rare commodity, even then. As a symbol of its admiration Collingwood immediately organised an art union, from which £210 was raised for his widow and children.

One of his children, Les, played several games for Collingwood in 1928, and a grandson, Geoff, played more than 70 for Hawthorn in the 1970s. So the Angus name lived on in football, long after George’s premature death — a worthy legacy for a fine sportsman.