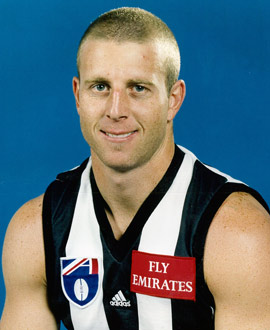 A former Woodville-West Torrens flanker who was initially drafted by Melbourne in the 1993 pre-season draft before he had even played senior football.

He was picked up by North in a three-way deal between the Demons, Roos and Freo and joined North as a winger, half-back or half-forward. An unobtrusive type of player with great goal sense.

Freeborn had a delayed start to the 1995 season, but hit form late in the year and was in the side by the finals.

In the 1996 Grand Final he turned on a special burst of three quick fire goals in the second quarter that tipped the balance North’s way and assisted materially towards the premiership.

He developed a reputation as a player who bobbed up at finals time, playing in all of North’s finals from 1995-98.

Limited game time in 1998 prompted him to accept Collingwood’s offer when he was out of contract and North did not match the Magpies’ offer.

He went from being a bit player to one of the few men with experience at Collingwood and played every game across a variety of roles such as back pocket, wing, half-back and half-forward. He spent the early part of the 2000 season on the bench and missed the final nine rounds.

He played in his third Grand Final in 2002, but after three early games in 2003 was omitted and never regained a senior place.