The Mark of the Year that wasn't

It was Queen’s Birthday, 2001, and Channel Seven’s Gerard Healy immediately gave it the royal ascent.

When Chris Tarrant launched himself into a pack of players in front of him, which included teammate Mark Richardson, as well as Melbourne’s Shane Woewodin and Paul Wheatley, he put a down payment on the Mark of the Year by dragging down the Sherrin with him.

The Herald Sun said of Tarrant’s towering mark that “it was (Michael) Roach, (Stephen) Silvagni and (Peter) Bosustow all rolled into one.”

Healy’s colleague Dennis Cometti posed the question, saying it “could well be Mark of the Year.”

Healy was more emphatic: “The Royal Decree has it that this is definitely mark of the year.” Never mind the fact that this was round 11 and half a season remained. Healy was calling it.

But, as it turned out, no one – not even Her Majesty – could have imagined how Tarrant’s mark could be overtaken by a stepladder into the stratosphere only three weeks later.

More of that, later, but let’s for the moment concentrate on Tarrant’s mark, and Collingwood’s surprise Queen’s Birthday blitz of Melbourne in 2001, only a year after the Demons had played off in a Grand Final. 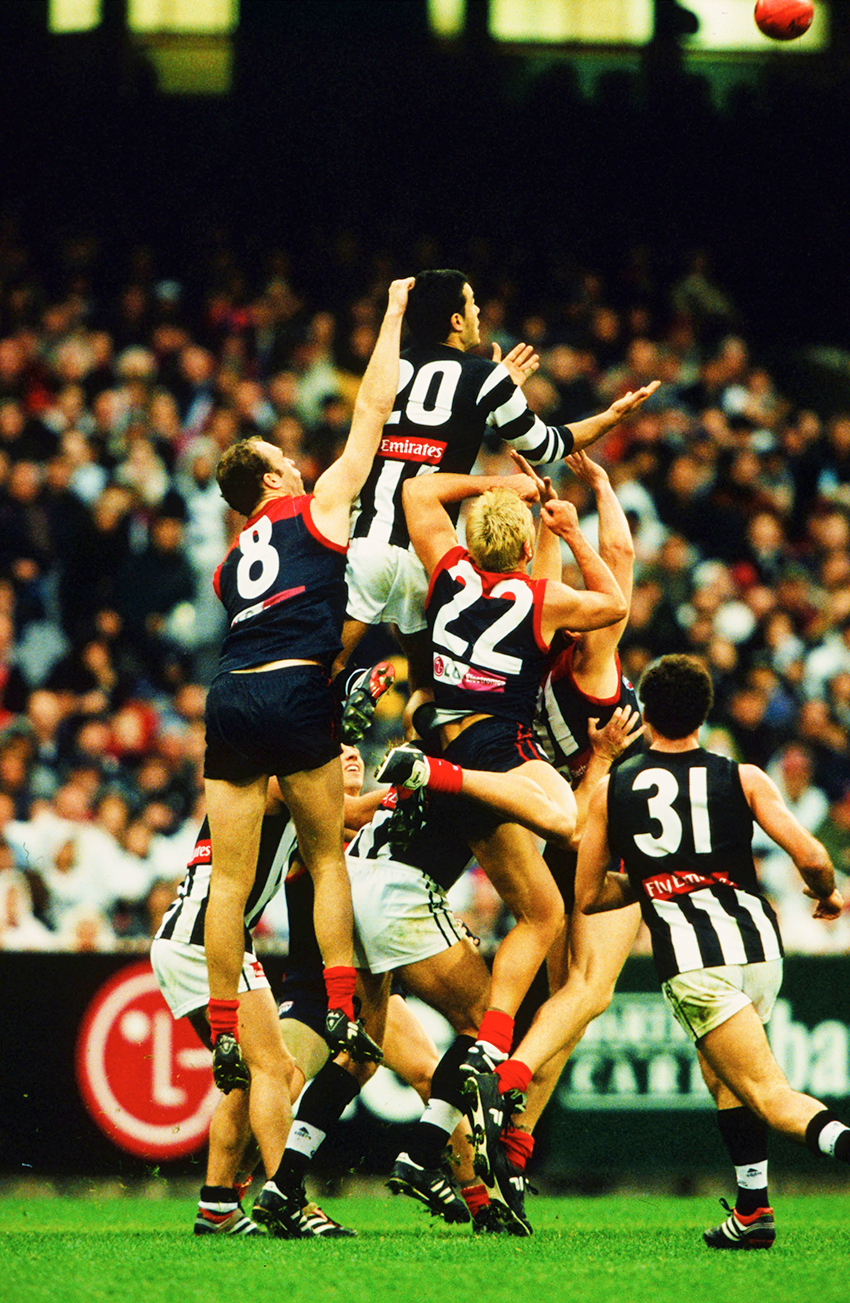 Chris Tarrant soars to take one of the greatest marks of all time on the Queen’s Birthday, 2001.

The Magpies were coming off a disappointing loss to Sydney the week before, and had to face the Demons without Nathan Buckley, who was overruled with hamstring tightness.

Buckley wanted to play, but was overruled. Coach Mick Malthouse wanted to lessen the club’s reliance on its captain, saying before the game: “Being Buckley focused has never been an issue with us; we’ve been very purposeful in ensuring we don’t get locked into one individual controlling our destiny. I think any side that has ever done that has never achieved anything worthwhile.

“I’m not denying the fact Nathan is a very good footballer, but we didn’t go out of our way to change the structure, we changed strategies, but not the game plan at all.”

Compounding the Buckley absence was the fact that vice-captain Scott Burns could not be considered.

That left the two deputy vice-captains in Anthony Rocca and Mark Richardson to vie for the skipper’s role. They struck a compromise. Richardson did the coin toss; Rocca addressed the playing group.

This was Malthouse’s 33rd game as Collingwood coach, and his 411th overall. Neale Daniher had been Melbourne’s coach in 83 games.

Tarrant was playing his 54th game, and the 20-year-old was the fourth youngest Magpie that day. He was older than Ben Johnson (also 20), Josh Fraser (19) and Ryan Lonie (18).

The youngest on the field that cold and wet June afternoon was an 18-year-old Demon who would make his mark at another club. His name was Scott Thompson, and he would soon look to return home with Adelaide.

Collingwood kicked five goals to one in the opening term, which set up a quarter-time lead of 26 points. Things started to tighten a little early in the season term before the Pies powered away again.

Enter Tarrant for his big moment. It started from a Fraser hit out that landed in the arms of Tarkyn Lockyer who put his boot into the ball. It sailed deep into the Magpies’ attack. 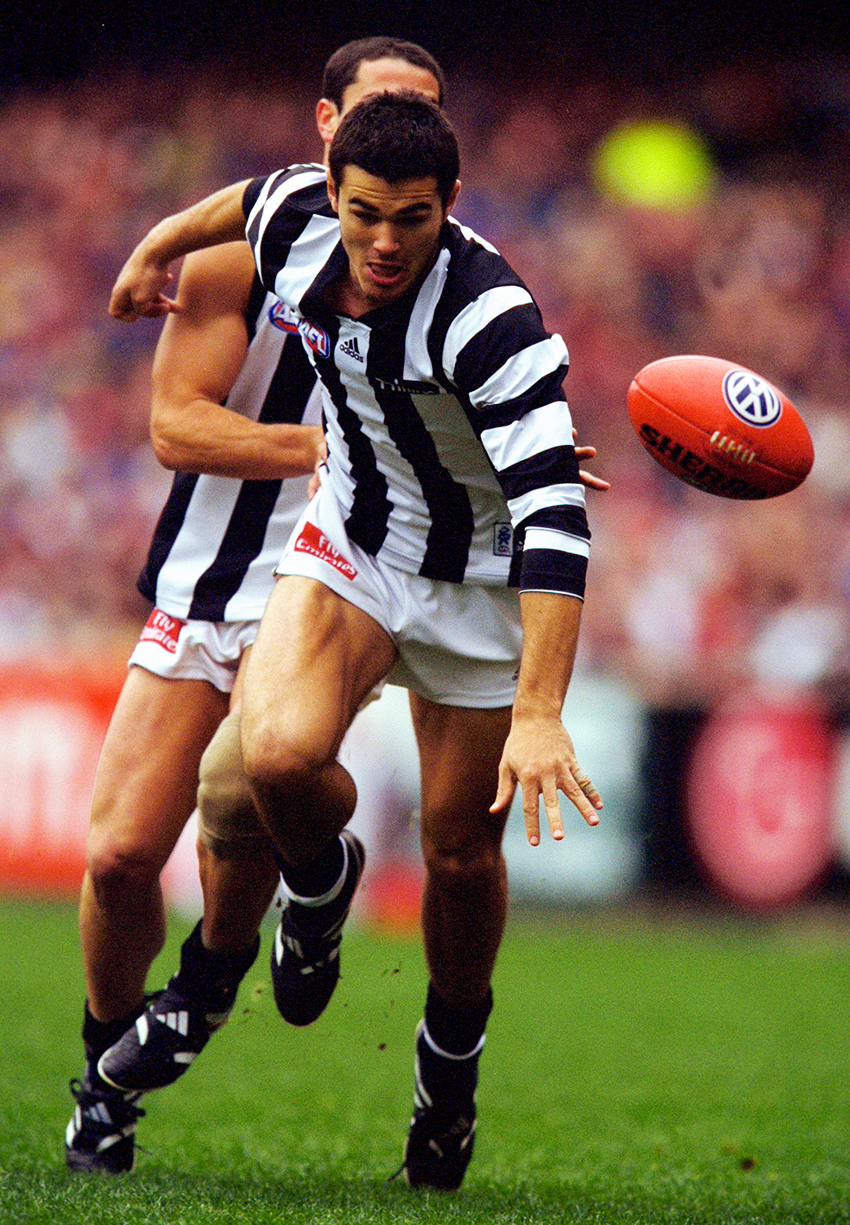 Tarrant chases down the loose ball on the Queen’s Birthday, 2001.

For a moment, it looked as if the ball would disappear into a pack of players that had gathered deep in Collingwood’s attack.

Then, according to the Herald Sun, Tarrant “rose from nowhere at the back to float and kneel at the altar on Mark Richardson’s shoulders. His long-sleeved arms wrenched the ball in and hugged it to his chest.”

Mike Sheahan joked that the young Magpie forward “got so high … his head would have hit the roof had the game been played at Colonial Stadium (as the Docklands Stadium was called back then).

The Australian summed it up perfectly. Chip Le Grant described how Tarrant “leapfrogged half a dozen grown men in the middle of the MCG to pull down what is almost certain to be judged the mark of the season.”

“To put it in perspective, this was no clean catch high and dry under the Colonial roof. It was raining, the wind was blowing and, from ground level, the skied kick that brought the attention of a massive pack in Collingwood’s forward 50 must have looked as though it had been dropped from one of the light towers.

“Yet … Tarrant judged his extraordinary leap perfectly. The ball stuck to his chest just as he reached cruising altitude, that sublime moment in a high mark when ascent pauses briefly before descent.

“From the safety of the grandstand, the landing came with a roll, then a thud. Closer to Tarrant, it would have come with the rushing sound of air leaving his lungs in a hurry.”

In keeping with the moment, Tarrant completed the deal with a goal that pushed Collingwood further ahead in the second term.

After the game, he knew the importance of what he had done. He explained: “Pack marks are harder to come by these days but they are one way you can do it for the crowd and do it for the team as well.”

Tarrant grabbed the highlight; Rocca took the Brownlow Medal votes. Rocca kicked 4.4 and had 21 disposals in the match, while O’Bree (27 disposals) got two votes and Nick Davis (3.3) scored one vote.

Fraser and McKee had the better of Jeff White, Andrew Dimattina (in his 17th game) shut out reigning Brownlow Medallist Shane Woewodin, while Johnson quelled the influence of Andrew Leoncelli.

The Pies appeared to be building towards something in the future, though no one knew what that might be. Sheahan explained: “There’s a certain something about Collingwood. Something indefinable; yet something compelling. It is exciting and will only grow bigger and better, given the youthful flavour of the player list and the obvious hunger in every section of the club.”

It was a day to remember for Magpies’ fans. Tarrant had risen to a new level, and only something extraordinary could possibly have knocked him off.

Incredibly, that’s what happened three games later when Gary Moorcroft launched himself on the back of Brad Johnson to drag in one of the AFL’s greatest marks.

Tarrant’s luck was out. But it was fitting that two years later, this time against Geelong at Etihad Stadium, Tarrant’s spectacular mark over Matthew Scarlett and Max Rooke won him the 2003 mark of the year.