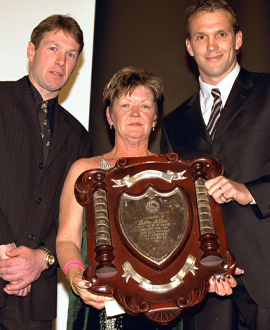 The history of this award is a little confusing, but we’ll do our best to explain. The Best Clubman award was only presented twice prior to the 1980s, but became a regular staple (albeit under a few different names) from the mid-1980s.

In 1991, after Darren Millane‘s tragic death, the club established the Darren Millane Perpetual Memorial Trophy, which was voted on by team members, choosing their most valued teammate or best team man (and became known as the ‘teammate’ award).

In 2000, the club effectively combined the two awards, presenting the Darren Millane Trophy to the player adjudged to have been the Best Clubman of the year.